For every trusted online casino, there are ten blacklisted casinos that you must look out for. These rogue operators will try to scam you out of your hard-earned money by using rigged games, unregulated, cheating software and a fraudulent set of rules and regulations to make sure you lose.

Why? Online gambling is a cash cow for crooks. With gross profits totaling $40 billion in 2015, more unscrupulous casinos continue to pop up, existing only to rip off their customers. These casino scammers will steal your cash and then close down shop before the authorities have time to find and arrest them, leaving you no recourse to file a claim for your losses. Virtual casinos are strongly established in Europe, Asia and the Middle East, but is expanding into the United States in a big way as well – in the first month after being legalized in New Jersey, online gaming had already generated over $8 million in revenue, and is projected to bring in $463 million by the end of 2017.

But online gaming also generally isn't as well-regulated as playing at a brick-and-mortar casino in a place like Nevada or Atlantic City. Major casino industry players like Virgin and Caesars Entertainment Corporation now operate online casinos that are just as reputable as their land-based properties, but for every one of these, there's ten shady little fly-by-night operations just looking to hustle their customers.

From bait-and-switch tactics to outright theft, here's the common scams and swindles you need to watch out for when playing online.

One of the most popular bonuses that online casinos offer is the “deposit bonus”. You'll see it advertised in gaudy numbers on their homepage and in their affiliate ads. The offer is usually a matching bonus of some sort – you deposit $100, and you get an extra $100 to play with, for example. But it's never that simple.

Click on their “terms and conditions” link, and in fine print, you'll usually find you have to wager (or “play through”) much more than your initial deposit to become eligible for the bonus.

Now, this isn't an out-and-out scam, in terms of being illegal. Even brick-and-mortar casinos will require you to play through a certain amount before becoming eligible to claim any winnings generated from your free play dollars. They'd go out of business if they offered free wagers with no strings attached!

However, traditional casinos almost always only require you to play through the amount of the bonus – for example, if you get $20 in free play, you only have to wager $20 before you can start collecting your winnings.

This is rarely true at online casinos. You'll find they usually require you to play through anywhere from 5x to 20x the bonus amount. So collecting that $100 bonus could require you to wager as much as $20,000!

Another condition that online casinos sometimes add is that the bonus must be collected within a certain time limit (usually 24 hours) after your initial deposit. If you don't play in that time or don't meet the wagering requirement, the bonus vanishes.

Easy to deposit, hard to withdraw

Deposits and withdrawals are another areas where casinos count on eager players not carefully reading the terms and conditions before jumping in. Online casinos will usually offer a broad range of payment methods for making deposits.

But that range of options may not be nearly as broad for withdrawals – the worst of the bunch will take everything from Paypal to Visa up front, but when it's time to pay out will only offer a bank check by mail that can take weeks to get to you.

Online casinos are also able to put limits on how much you can withdraw at a time and how often you can do it. You may hit a big jackpot only to find you're only allowed to withdraw chunks of it at a time over a period of weeks!

If you're playing from a European or Asian country where online wagering is legal, there's no legitimate excuse for an online casino to take more than a few days in processing your payout.

Since online gambling is still illegal in most of the United States, players from that country can expect longer payout delays from the casinos willing to accept them, but anything longer than two weeks is still abnormal.

If an online casino is still trying to make excuses (such as claiming they've lost your identification documents) or invoke obscure clauses and conditions to avoid paying you out after this time, it's pretty safe to assume they're trying to rip you off and it's time to consider legal action.

The software that runs the games you play online may not be playing fair. This is another issue that comes about due to the relative lack of regulation online – land-based casinos usually have local regulatory agencies who do regular inspections of casino machines and can be called in if a player believes a game is rigged, but this isn't true for online casinos in many parts of the world.

It's often difficult (if not impossible) for a player to detect cheating software. It won't be as obvious as simply giving the house the win every single hand. Unregulated casino software will instead make small tweaks to the odds such that a player will end up winning with a smaller frequency over a period of time than would be statistically probable if the game was fair. The player will still end up with a few wins but is much more likely to walk away having lost money overall.

So how can you tell? Independent testing is the only way to verify a game is fair. Reputable casinos will contract with an outside testing agency to periodically verify that their games are legitimate.

How To Protect Yourself From Ripoffs, Scams, and Fraud

Casinos often operate from small island countries, particularly countries in the Caribbean. Government oversight varies greatly between countries. The casinos that are most tightly overseen and regulated by a government are those based out of the United Kingdom. Their operations will usually be based out of Gibraltar or the Isle of Man, territories that are both overseen by Britain.

Aside from sticking to casinos that have strong governmental oversight, you'll want to look for those that are monitored and have their games tested by independent agencies. eCOGRA and Certified Fair Gaming are two of the most prominent agencies. 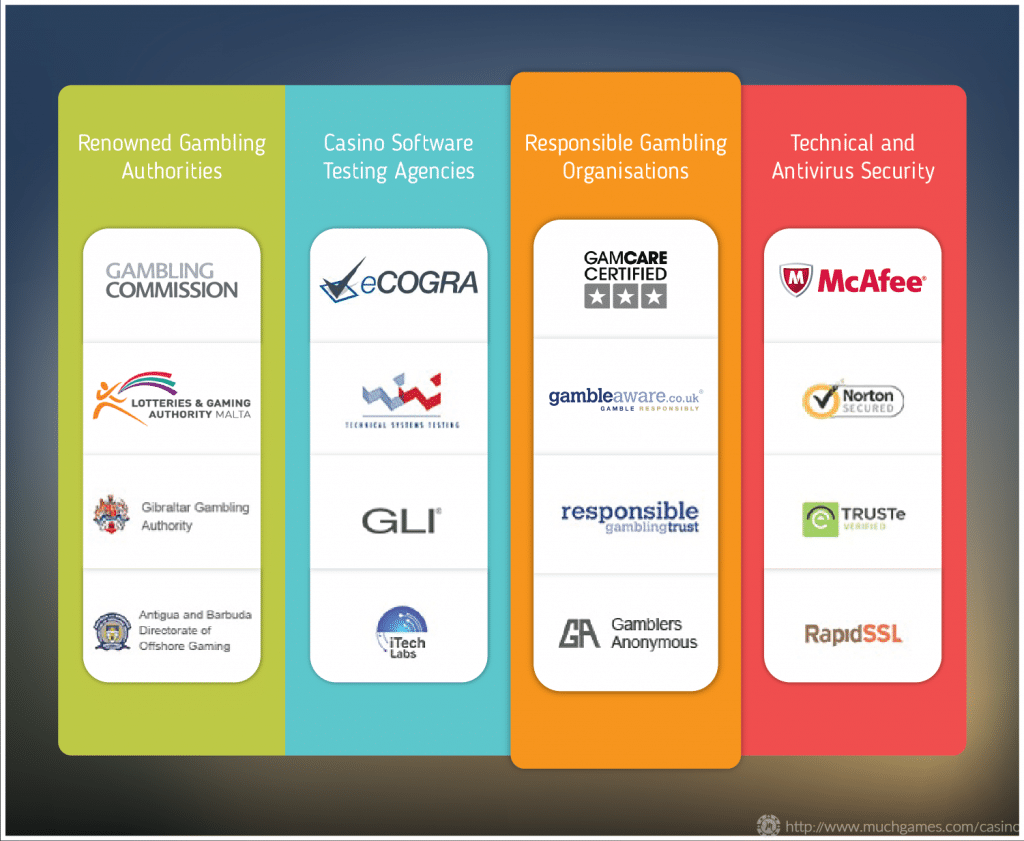 Beware of dishonest casinos that may simply display the seals of certification companies on their pages without actually being certified. Be sure to check with the company they claim to be certified with – they usually publish a list of certified casinos on their web page.

One final consideration is the software that the casino uses. Microgaming and Playtech are by far the most common casino software platforms used, and both have long reputations and are trustworthy. Odds On Gaming and Cryptologic are two up-and-comers that thus far have solid reputations. If a casino uses unfamiliar software or uses their own proprietary software, it's a red flag.

How to Play Guide