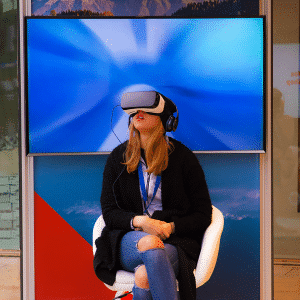 Virtual reality headsets and apps are a trend that have swept the nation.

While almost everyone was excited to see what they had to offer, one user, life-long gamer Tim Donahey, took his gaming to the next level.

When he strapped on his HTC Vive and Polar H7 heart rate monitor, his goal was to see how many calories he could burn each time he stepped into the virtual realm.

Surprisingly, he was able to burn 866 calories in just 65 minutes. This made his gaming activities just as healthy as a jog around the block.

These numbers inspired him to set a fitness goal: improve his aerobic fitness and lose weight in just 50 days.

He was going to achieve this, not with traditional exercise, but by playing his favorite virtual reality games.

During the 50 day period, he used the following routine:

Just 50 days later he had achieved his goal. Donahey successfully lost 14.4 pounds by exercising vigorously for five days a week and by exercising moderately for one day each week by testing new virtual reality games.

He took one day to rest each week. Then he spent his time playing blackjack for real money.

There is no question that Donahey lost weight. Not only does the scale tell this tale, but he is also noticeably smaller around his midsection.

However, a benefit that was even more important is that he feels better.

During a recent interview with Donahey, he stated what his routine was like and where he plans to go from here.

Shifts in the Routine Were Necessary along the Way

Donahey stated that his routine never got old. Holopoint and Thrill of the Fight were both great games and provided a demanding and rigorous workout.

However, he discovered that Longbow wasn’t the best warm up after a few weeks, so he changed to Audioshield.

He made another change around day 40 when he received beta keys to Bitslap and Sword Master VR.

In the last week, when he used these new games, it helped him burn more calories and provided the boost needed to help him reach his original goal.

The Weight Loss wasn’t Due to Exercise Alone

In a statement written by Donahey, he mentioned that he didn’t stick to any strict guidelines regarding his diet.

He did say that he tried to make some good choices. He indicated that he chose foods that were more nutritionally dense over foods full of “empty calories” such as fries.

He also drank less milk. This wasn’t because milk is unhealthy, but because he would rather eat 250 calories than drink it.

During the 50 day period, he still ate ice cream and cheeseburgers occasionally but also mixed in quite a bit of salad.

The biggest change made was that he only ate items he could closely estimate the calorie content to.

Virtual reality can’t control his eating habits. However, there are some benefits provided by this type of fitness routine:

It was an easy trade-off to make.

He Looks and Feels Better

According to Donahey, he not only looks better but also feels better and more graceful.

Taking his son for a walk is more effortless, and he feels more energized – especially on the days he worked out.

He is Inspiring Others to Make a Change

One of the things he wanted to make clear about the entire journey was that it has helped to effect and influence other people.

He stated that people have been reaching out to him constantly and are now making their own fitness and weight loss challenges by using virtual reality.

Donahey started a VR fitness group on MyFitnessPal. He now has more than 50 members.

He began a group on Reddit – r/vrfit. While theirs is nothing there right now, he hope’s it’s going to take off soon.

He is a Self-Inspiration

Donahey stated that this was an exercise routine was something he enjoyed.

He also wishes that more virtual reality games had a faster pace. Due to this desire, he has begun a gaming studio to help and fill that void.