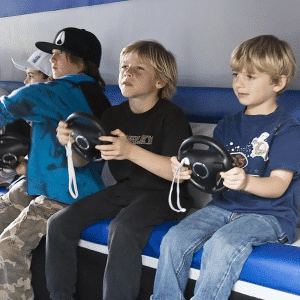 According to ongoing studies by University of Wisconsin-Madison professor Brittany Travers, children on the autism spectrum may benefit from playing video games on a regular basis.

She also suggests that card games like blackjack may be beneficial for children with autism for improving their motor skills.

This most recent study is not Travers first attempt to better understand the autism affected mind.

In fact, Travers previously published her prior research making the suggestion that poor motor skills directly correlate with more severe symptoms of autism.

As a result, many are curious about the link between playing games and improving a child motor skills when they have autism

Travers has actively brought children on the autism spectrum to her lab to observe their brain before and after playing video games.

Upon arrival, she tests their IQ and scans their brains. Once the initial testing is done, she gives them video games to play for a certain amount of time.

At the conclusion of the gameplay period, the testing is repeated. This is done to explore the changes that occurred after the child played the video games.

The results of these studies have been compiled, and Travers plans to publish her findings in the near future.

However, there is anecdotal evidence from her lab that points to improved well-being and function for the children who play video games.

There is some research that shows video games can also improve motor and spatial skills in children with autism.

With the connection that Travers has uncovered between autism and motor skill issues, it is possible that video games can change parts of the brain directly associated with motor skills, improving them significantly.

There is no question that computers are considered an asset for academic performance for all children.

In many cases, children on the autism spectrum perform better when they have access to digital versions of tests, rather than traditional, pencil and paper versions.

Also, technologies, such as video games, help to improve attention.

Kids who are affected by autism are much more motivated and attentive when playing games or even using a computer than when they are given more traditional learning methods.

As a result, this may help to improve emotional and social development, as well as communication and language skills.

Also, playing games regularly can help reduce repetitive behavior, which is a common issue for children on the autism spectrum.

Even though there is still a need for additional research regarding the impact of technology on children on the autism spectrum, there is also a tremendous amount of promise in this area.

A Seattle-based therapist, Sarah Swenson, MA, LMHC, works with children with autism, as well as their families to help them find effective ways to improve a child’s ability and well-being.

She currently encourages parents to implement the use of video games into their children’s lives.

Swenson encourages game play because of the differences in the ways that children with autism process information.

She believes that this plays a role in how video games benefit these children.

Even though the research on this topic is still not complete now, Swenson doesn’t believe it is going to hurt to use video games for children on the autism spectrum.

Travers has made the statement that all children can benefit from the additional physical activity and that this increased activity doesn’t necessarily have to come from playing video games.

In fact, she actively encourages families to utilize several methods for increasing their child’s level of physical activity; however, she emphasizes the need for this to be done as a family.

Learning more about children on the autism spectrum is still something that requires time and effort. However, many researchers are actively doing just that.

As a result, more and more is being learned about these children, their abilities and different factors that may help them.

Video games are just now being discovered as a helpful tool, and as time passes, their role and benefits will increase.