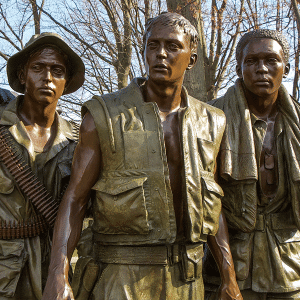 As more soldiers return to the States after deployment overseas, many are suffering symptoms of PTSD and other mental disorders.

Some of these cases are severe, while others are more moderate and subtle.

For Stephen Machuga, an Army veteran who returned approximately ten years ago, his symptoms were more subtle, yet still pronounced enough to disturb his day to day life.

For him, the cause of anxiety and stress was something seemingly normal for those who had never been to Iraq – trash day.

According to Machuga, in Iraq insurgents would embed explosives in refuse. He had become accustomed to searching for wires hanging out of piles of garbage.

Now, when Tuesday arrived (trash day in his neighborhood) Machuga's mind began to twitch upon seeing the large bins and bags dotting the curb.

For many returning veterans, this is exactly what civilian life is like. According to Machuga, he tries to engineer a “new normal.”

However, he made the comment that it was as if his brain wouldn't ever turn off.

He couldn't seem to stop imagining dangerous scenarios about his surroundings – he also really missed all his military buddies.

He said he had many days where he would just drive past a recruiting station to see someone in a uniform.

With constant “mind itching” Machuga was finally able to find mental relief in one of his lifelong hobbies – playing video games.

He made the statement that “there's something here,” as he made the transition back to civilian life after spending 13 months deployed in Iraq.

During deployment, Machuga kept a Game Boy Advance console tucked away in his shirt pocket.

He has shared his experience and the relief he has found with video games on Stack-Up.org, which is a foundation he created.

This is a Pittsburgh-based nonprofit organization that provides support for veterans by promoting a shared love of gaming.

Recently, a huge step for the organization was when Palmer Luckey, founder of Oculus VR stated that he was joining the advisory board of Stack-Up on Twitter.

Luckey said that it was important to take care of those who fought to keep Americans free and safe.

He also believes that the gaming community, gamers, and games play a major role in that care.

The Stress Relieving Benefits of Gaming

Machuga, who is also an occasional real blackjack player, initially met Luckey a few years ago when he was working to develop a prototype of modern Oculus VR goggles.

While gaming is not considered an “easy fix” for veterans, it can help to encourage military members – regardless of their rank – to once again have that sense of camaraderie through their shared hobby.

This, in turn, helps them to relax their minds.

When deployed, military members are often doing dangerous tasks, such as transporting supplies or patrolling for several hours.

However, there is the other 18 hours of the day, where all that's going on is waiting for the next task, lifting weights, sleeping and eating.

A new way to pass the time and decompress is more than welcome.

Also, unlike movies, playing games requires more interactivity and a much higher level of engagement.

Dean Hall, a military veteran and game developer, created DayZ. This is a survival game where players scavenge for weapons, water, and food.

He was originally from New Zealand and served in the air force and army in the country. He has also joined the advisory board of Stack-Up.

Paying a Debt to the Vets

America owes a debt to veterans returning from places overseas. In addition to video games, some groups are using 360 VR to assist veterans.

For example, the Veterans United Foundation announced a VR collaboration in 2015 that was called “Honor Everywhere 360.”

With this organization, Veterans who did not have the ability to travel were provided VR goggles to watch the film and be transported to memorials in Washington, D.C.

This was extremely beneficial, especially considering the U.S. is losing approximately 500 WWII veterans every day and many die before they have the chance to visit these memorials.

With technology, these vets have the ability to see the monuments – even when confined to their bed, home or hospital.

The Ongoing Impact of VR

In the future, VR may be able to help deployed men and women connect with their families back home.

Machuga is playing an active role in this movement, with Stack-Up being his second nonprofit effort.

In 2010 he founded Operation Supply Drop, which sent video game goods to deployed members of the military.