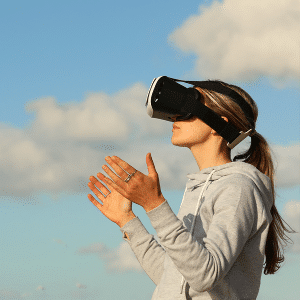 For some people, certain things in the world trigger an irrational or disproportionate fear response.

Examples of this include:

Those who have survived trauma, and suffer from PTSD (post-traumatic stress disorder) may experience these feelings even worse than others.

Crowded streets may trigger a memory of a roadside bomb or past battle for a soldier, which makes regular interactions impossible or difficult.

People who have been assaulted may experience fear when seeing a stranger on an otherwise quiet street.

The process of overcoming anxiety disorders and recovering from PTSD is extremely challenging and time-consuming work.

However, it is also critical for those suffering from these conditions to find a way to overcome them.

While there are many treatment options, a new tool that may make it easier for thousands of patients to receive the help they need is VR – virtual reality – technology.

This allows individuals to be mentally transported to another place, another time and even another state of mind.

Simply slip on headphones and a headset and users can see and move around in a 3D world wherever the program has been set.

It allows users to explore underwater worlds or ride a roller coaster.

Users can even experience the situation that triggers their debilitating anxiety – all while a professional helps you overcome the fear.

The Current Role of VR in Therapy

While virtual reality is still a somewhat difficult to understand idea for some, especially those who have never experienced it, it is something that has been used in clinical settings for almost two decades.

One doctor who is a strong believer in the benefits offered by VR for therapy is Dr. Albert “Skip” Rizzo from the University of Southern California’s Institute for Creative Technology.

This is the same place where Palmer Luckey, creator of the Oculus Rift, previously worked on VR technology.

Since the mid-part of the 1990s, Rizzo has worked with clinical VR.

He even received an award from the American Psychological Association for the work he did in the treatment of PTSD.

He has even created VR therapies to teach individuals to use prosthetics and to recover their physical abilities after suffering trauma or a stroke.

He is also currently working on various VR scenarios to help train people suffering from the autism spectrum disorder in social and vocational settings, among other factors.

Right now, there is quite a bit of research backing up the possible clinical uses of VR.

However, even though VR has been used for several years now, it was still mainly unavailable to the public because the special headsets and systems were too expensive for most people.

But in 2016 headsets such as the HTC Vive and Oculus Rift went on sale, eliminating this accessibility issue.

According to Rizzo, technology has finally caught up with the vision for this area, and he states that it is only going to continue to speed up.

It was not research or theory that held back the advancement of clinical VR, but instead, the availability, adoption, and cost are what limited its widespread use.

Today, VR is mainly used for exposure therapy purposes. It is used to slowly expose people to a situation that triggers feelings of anxiety of PTSD.

According to experts, this is one of the best and most effective treatments for these conditions.

Using VR allows people to become accustomed to the scenario that causes them fear, enabling them to learn to cope with it.

Many people have already successfully been treated, including those suffering arachnophobia, social anxiety, flying and even PTSD.

What’s in Store for Clinical VR

With headsets now widely available, patients all over now have access to this treatment method.

Even though the headsets are going to play an important role in this treatment, they won’t replace therapists altogether.

Right now, there is quite a bit of excitement about creating virtual spaces and worlds. Rizzo believes that the next big development is going to be the creation of AI-powered virtual humans who are going to inhabit the worlds.

The fact is, VR is extremely beneficial for therapy; however, its benefits go beyond therapy, as well.

For example, it can help enhance news stories, build empathy for someone else’s plight and give people new experiences.