What the IoT Needs to Become a Reality 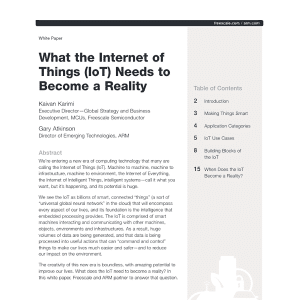 The world has entered a new era related to computing technology. Many are referring to this time as IoT – the Internet of Things (among other names). Many in this field feel as though the potential it offers is unlimited.

The IoT is composed of billions of connected, smart “things” that are going to encompass every component of human life. The foundation is the intelligence offered by embedded processing. IoT is made up of smart machines that are interacting and actively communicating with other machines, infrastructures, environments and objects. This means that huge amounts of data are being generated and processed into useful actions to make life safer and easier while reducing environmental impact.

The study focuses on the impact of this technology and the amazing potential it has to transform and improve life. Other factors and questions answered in this white paper include:

What IoT needs to become a reality